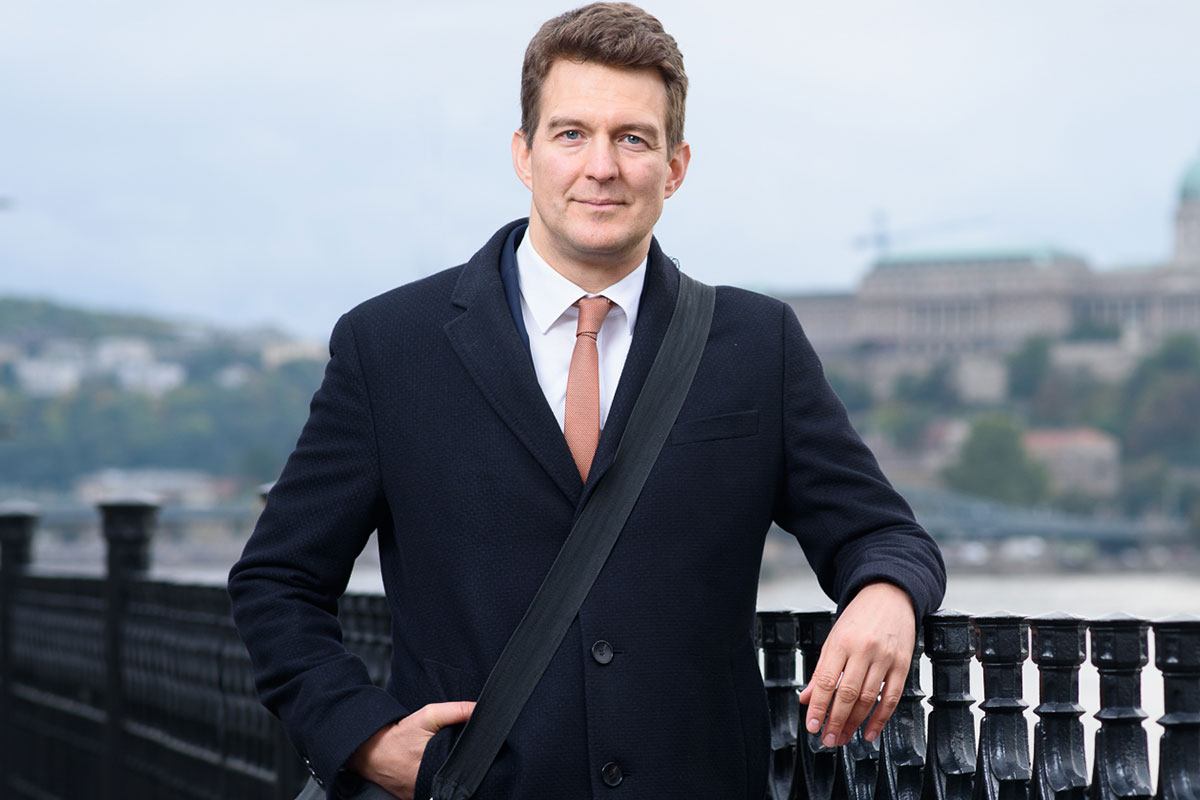 Posted at 10:02h in interview by Author One 0 Comments
0 Likes

Dr. László György, State Secretary for Economic Strategy and Regulation, Ministry for Innovation and Technology, introduces a smart economic model that is focused on innovation

You published a book just a few years ago—later translated into English—about Hungary’s successful economic model: a model that, over the last decade, has seen wages surge, debt dramatically reduced and innovation placed at the forefront of the economy. To start this interview, let’s look at the evolution of Hungary’s economy over this last decade. What kind of smart economic policies emerged in Hungary to make it the second-fastest growing economy in Europe, as recorded in quarter three 2019?

According to Harvard professor Dani Rodrik, we can either believe in more market or more state control. Too much state intervention pushes people toward markets, whereas too much market and “hyper-capitalism” pushes people toward state intervention. Hungary hasn’t gone down either of those routes. Market forces created discontent with globalization, but we didn’t suspend market capitalism—instead, we kept market capitalism and we fixed it. This means that those monopoly and oligopoly players seeking rents in the Hungarian market have been taxed—something we’ve been fiercely criticized for. This money was not directed toward over-generous social spending, however, but rather on reducing the burdens on labor and working families with children, which made the Hungarian labor force even more competitive. We created a kind of redistribution away from rent-seekers and toward those companies and workers in competitive markets. This is one of the key reasons Hungary has been so successful over the last 10 years.

We were not misled by dogma and leftist sentiment, but we found answers to the failings of globalization, while “staying in the game,” and remaining one of the most open economies in the world, with one of the highest exposures to exports and imports. At the same time, this led to huge employment growth in Hungary: more than 800,000 jobs were created, which is the second-highest increase in employment rates on record. At present, we are focusing on increasing the quality of our labor force, developing higher education, financing adult education programs and changing vocational education. At present, Hungary is conducting its largest-ever reforms in adult education and higher education, and vocational education reform is also going on in Hungary.

Can you share with us your vision for Hungary’s economic development and transformation into a knowledge-based society? What new policies are you favoring?

In parallel to this we’re also changing our vocational and adult education system. We’ve reduced the number of vocations enormously from around 700 to 170, and we’ve liberalized and deregulated vocational education to make it more flexible for vocations to come into the system and be administered. The requirements of the employment market are changing very rapidly, but the state-managed systems haven’t been capable of following this rapid shift. We’ve made the system capable of following this shift.

As Hungary kicked off the new decade, you ushered in a diverse and updated set of targeted programs aimed at further building on the economic success of the last decade, while tapping new, innovative areas. These include the new Small- and Medium-sized Enterprise (SME) Strategy 2030, the Creative Industry Strategy 2030 and the new Artificial Intelligence (AI) Strategy 2030. Can you tell us about some of these programs, their overarching goals and ambitious targets?

SMEs are the core of the economy. If we want to be competitive, however, we need large multinational companies, and we need SMEs that can serve these companies, that can survive on their own and one day become large companies themselves. SMEs are the largest employers in Hungary. For this reason, we decided to help these companies to increase their digital skills, to help them learn and acquire new knowledge, and to become export oriented. Many Hungarian companies are facing their first generational shift, with older generations passing leadership over to younger generations. Historically speaking, this is the first time since the 45-year communist era that company owners in Hungary are retiring and needing to find somebody to take over.

We’ve highlighted some key sectors that we believe are the sectors of the future, such as the creative industries, healthcare, food, construction and tourism. We’re creating strategies in order to help these sectors and companies in them with special programs. We believe what others are saying about us: that Hungarians are probably more creative than the average. The Budapest CEO of BlackRock, the world’s largest asset manager, has said that Hungarians are probably more creative than others. She chose Budapest as the location of their RDI center, saying that Budapest is a very pleasant and welcoming city in which to live, and also because Hungarians are critical thinkers. An Anglo-Saxon business mentality combined with critical thinking can be very useful. I think that this is true: if you can change our, sometimes pessimistic, critical thinking into some proactive energy, then you’ll be very lucky and successful with Hungarians.

Your ministry has the vision of making Hungary one of the top three European innovators and among the leading countries in the World Bank’s Ease of Doing Business Index within the next 10 years. What are some of the key ingredients that Hungary already has to become one of Europe’s top innovators and what remaining ingredients must the country continue to develop to achieve this goal?

We’ve changed the structure of financing innovation to make it increasingly practice-oriented, and more focused on applied research and real innovation. As most countries in Europe suffer from the “innovation paradox,” namely they’re strong in research and development (R&D) but weak in innovation, we want to make sure that there’s a much higher level of innovation than previously.

We’re spending a lot more on innovation in the next multi-annual financial framework (MFF 2021-2027). It’s at least 60 percent higher in this seven-year period than it was in the last seven-year period. We’re also constantly increasing the funding of R&D in Hungary so that it approaches 1.8 percent, so we believe that by 2030 we’ll reach spending on R&D that is 3 percent of gross domestic product (GDP). One of the key components of our Recovery and Resilience Plans—that every country in the European Union (EU) has to create—is the leveling up of universities. We’re spending €5 billion—around 4 to 5 percent of our GDP—on creating an innovation ecosystem in our universities, investing in the cutting-edge, up-to-date equipment needed for world-class research. We’ve created 10 science parks—two in Budapest and eight in the provinces at universities; and we’re creating around 20 national laboratories at universities and research institutions with special focus. We’re focusing on and investing in our strengths, and hopefully we’re attracting knowledge from outside by doing that.

You mentioned that reforms are coming into universities as well. What are you doing to create closer links between research centers and universities, and industries and corporations?

We have created a so-called Industrial Doctoral Program, which means that somebody doesn’t have to lecture or be a researcher at the university, but they can come from industry. That’s very important. The second thing achieved by changing the model of universities is that industrial actors are also able to lecture at universities much more easily than ever before. A third implication of this model change is that cooperation between universities and businesses is much easier than ever before. You don’t have to run through the same public procurement procedures as before, which were very complex and time-consuming, and which killed cooperation between universities and industry or businesses. If there’s a demand from businesses, our universities can immediately meet that demand. All these small details really make it possible to resonate with the demands of businesses. I believe that this will be the key.

Europe’s widely successful Horizon 2020 program has come to a close this year, giving way to the new proposal: Horizon Europe, a €100-billion research and innovation program. In the meantime, Hungary is also set to receive €50 billion from the EU’s 2021-27 budget. To what extent did Hungary engage and benefit from Horizon 2020 and in what key areas do you see the biggest opportunities for the upcoming Horizon Europe program?

In the 2014-2020 program, our share of Horizon 2020 was very low as the “older” European countries (EU-15) took about 95 percent of the available funds. This is an enormous—and also an alarming—sign that the EU might have different standards for older and newer member states. To tackle this situation, our researchers also need to be active and so we’ll incentivize them to apply for Horizon funds if they’re capable of doing so, or at least of creating an application or tender that is close to the standard of the Horizon plan. In such cases we’ll finance them accordingly. This system has already been introduced in our Forefront Research Program, which in essence provides funding based on excellent European Research Council and other prestigious basic research applications’ results for research both for Hungarians and foreigners.

We see some very special sectors in future industries in which Hungary and its scientists can be very successful. These are: big data and artificial intelligence (we are among the first countries in the EU to create a new big data law and an AI strategy); Industry 4.0; high-performance computing; the hydrogen economy; biotechnology and genomics (the health industry remains strong in Hungary); and electromobility plus automated and connected driving. The automotive sector is very important here.

When it comes to attracting foreign direct investment (FDI), Hungary has stood out as a country to watch. In 2019, FDI grew by 24 percent on the previous year, with 101 investments in 21 different sectors coming from 20 different source countries. How can Hungary better leverage its close cooperation with the other Visegrád Group (V4) countries to work together in attracting large investments to the region?

I believe that Central and Eastern Europe (CEE)—and primarily the V4 countries—now has a competitive advantage. The changes in the world economy are helping us to develop further. The magazine Foreign Policy asked 12 researchers and international relations theorists what they thought will be the most important change in the world in the next few years. Eight of them mentioned that supply chains, value-creation chains will shorten. This means that production will move closer to consumer markets because, after 2008 during the global financial crisis, companies tended to outsource their production for a few dollars or euro cents in profits. Security of supply is now much more important than ever before.

We believe that in the CEE region, in the V4 countries, we have very reliable workers who are eager to work and do so at a more competitive cost level than workers in other regions in the world for the same output. I believe that the discipline, fairness, stamina and skills of our workers are very important. The skills of our workers and the possibility to develop them—thanks to the reforms in our vocational and adult education system in Hungary—make us very attractive, and we can become even more attractive.

Do you have a final message for our readers about Hungary?

I feel that there’s something very special in Hungary and in Budapest. Business and investment decisions are based on hard data and hard facts but, at the end of the day, I believe that the more experienced you are, the more you decide by using your gut feeling. You have to come to Budapest and to Hungary to understand how we feel about our country, about our business and economic development, and what we’re doing for it. We are partners for everyone who brings employment, export potential and new technology to Hungary. We are very open, so come visit us and experience it because, without a doubt, you’ll be convinced.